Everytime I mention coffee picking in Costa Rica, it brings smiles on people’s faces. Almost everybody has childhood memories of their summer holidays spent in the cafetales (coffee plantations). I say “almost” because it seems you need to either have a relative who is a coffee farmer or be more than forty years old.

Conveniently enough, the harvest happens in the summer, summer meaning dry season, since there are actually only two seasons here, one dry (short) and one wet (most of the year). Schools close from mid-December to mid-February, originally so that kids could help out in the fincas (coffee farm).  During the cosecha (harvest), life stops and everybody is out in the cafetal picking coffee, although most of those who actually picked coffee as a child also tells me how much they hated it. They remember being in the sun all day, bitten by mosquitoes. So why are people being so emotional about it? Because it doesn’t exist anymore. I mean, I am pretty sure some kids still help out in the family finca, but it is not as common as it used to be, and there has been a shortage of coffee pickers for many years.

A few weekends ago, I attended the Feria del café in the beautiful little town of Frailes in the well-known coffee region of Tarrazu. It was a very interesting event where a lot of important coffee culture-related things happened. For example, groups of dancers from different areas of the country came to dance. There was first this group of children dressed as traditional campesinos, a person who works in the fields, and particularly in the cafetal. The setting is perfect, all the accessories are here: large hat, canasta, belt to hold it, jute bags, showels, baby coffee tree, even a wheel of a traditional carreta which was used to bring the coffee from the plantation to the beneficio (wetmill) before trucks were used. Everything but…actual real coffee cherries! The song tells about the happy time of the harvest, how nice it is to work in the cafetal together with the butterflies. No matter how cute they look, their body language (and the gesture of their hands) reveals their lack of experience as coffee pickers. (and sorry about the terrible quality and my absence of filming skills)

The second video features older kids dancing on another kind of song romanticizing even more the life of a coffee picker whose job it is to tickle the tree and dance and carry girls around.

The last video shows another group of dancers dancing on the same song than the first video, here is what the chorus says:

“The farmers are happy,

the harvest is very good,

how nice it is to pick coffee,

to be in the coffee plantation,

So what to do? Coffee grows everywhere, but there is a lack of people willing to pick it. The obvious solution is to open the borders. Since the 80s, People from Nicaragua and Panama has come to Costa Rica to work as coffee pickers or in cane sugar plantations. And now coffee picking has begun to be a family thing again. Many Nicaraguans I met came along with their families to either spend the summer picking coffee or have been living in the country for years. The distances are not very long between Nicaragua and Panama, but Panamanian people are mostly to be found in the southern part of the country when Nicaraguans are in the center and northern part. The Panamanians also come to work with their families. They are easily recognizable by the colorful dresses of the women like those two girls at the feria: 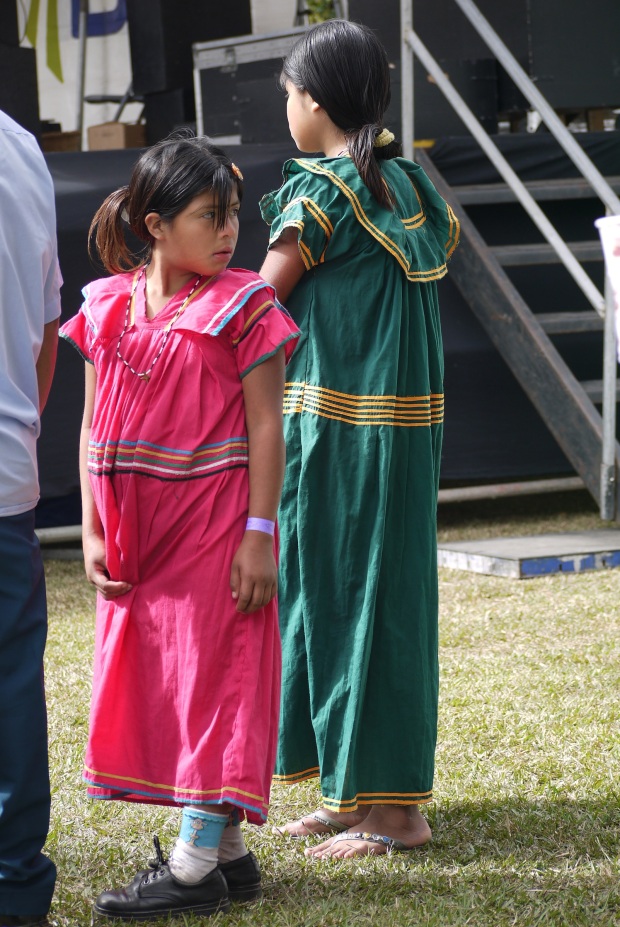 So, what is so difficult with picking coffee? Why are (or should be) growers so picky about it? Well, first of all, just like you need ripe sweet fruits to make a good jam, you need ripe red cherries to make the best coffee, those with the highest sugar content. The thing is, on one coffee tree, on one branch, not all the cherries will ripen at the same time, which basically make mechanical harvest impossible for high quality coffee. Therefore it needs to be hand-picked. 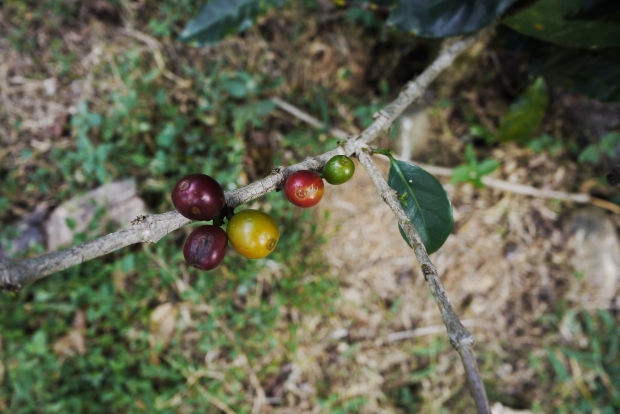 Here you can clearly see the differences: unripe cherries together with perfectly ripe ones.

A coffee picker needs to be really careful not to pick apparently ripe cherries, but they are tricky little things. You see it red on one side, you pick it, turn it around, and it’s all yellow on the other side, which is not ok. Also, you are not supposed to pick the stalk of the cherry. A coffee picker should be careful yet he has to go fast since most of the times, they are paid by the weight of cherries picked, not by the hour.

Things you need when you pick coffee: A large hat that covers your neck, good boots not to slip (for example rubber boots that grips the ground properly, remember that coffee usually grows in the mountains so most of the time the plantation are from a little to quite steep) and a canasta, sort of basket that you tight around your hips with a sort of belt.

That said, coffee isn’t picked as meticulously is any farm. I am talking about rather small farms with a focus on high quality coffee that will be exported. This step of the coffee making is one of the first that makes a difference in the quality of the cup of coffee you will drink.

What happens when the coffee is picked? There are two options. Some farms have their own wet mill, which is a place where the cherries are processed (If you have no idea what I’m talking about I promise you will very soon). At different moments during the day (usually late in the morning and at the end of the afternoon), the cherries collected are weighed. As you can see on the photo below, the cherries are put in a big box called cajuela. Coffee has its own measuring unit (1 cajuela = 20 liters). Here you can see one of the most inspiring and creative farmer I’ve met, Don Carlos Ureña, owner of finca La Pira, inspecting the harvest.

For each person, he would write down the amount of coffee picked:

However, most of the farms don’t have a mill. They need to bring the cherries to a nearby mill. Back in the days, beautiful wooden carts like this one below were used, but nowaydays, you’ll meet plenty of trucks during the coffee picking season.

ok, don’t laugh, this is the only picture I had to show you a traditional colourful Costa Rican cart. This pic was taken at the feria del cafe right before the coffee picking competition…and yes, I competed!

Altitude, varietals, composition of the soil, cold nights and warm days, shade, are all more or less well-known secrets to produce high quality coffee. But picking the right coffee cherries is a step prior to processing that matters, a lot. It sounds easy, but it is actually a real challenge. In an ideal yet possible world, there are a few solutions that would help farmers and pickers to be more picky (sorry about the bad pun) like making people from the seed to the cup work together (in the farms, mills, roasteries and cafés). If you are interested in that matter (and you should), I suggest you watch this :